THE JEALOUS IN LAW 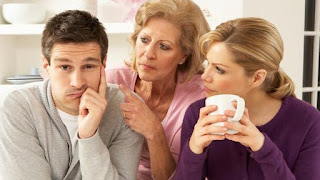 At home he and Sheila sat close to continue their chatting while Amanda listened with great focus as if she could relate to the topics they discussed about. Sheila, her mother called. Come to the kitchen and help me slice the cabbage while I fix lunch. As was their regular custom on Sunday’s Sheila and
her mother went straight to the kitchen after they changed into home wears to fix lunch for the family while Jake and Amanda cleaned the rooms. Blessing and Loveth kept their father busy with random conversations while they played in the sitting room. Questions occasionally came to Andy from John about life, job and his travels around. Soon the meal was ready, Grace came to the dining room with a plate heaped to the brim with rice, stew and a large flesh looking tasty then asked Andy in hausa za ka chinye ko – you can finish this right? And he nodded both of them smiling while she dropped the huge food before him going to get her own portion. The clicking sound of spoons on plates began as they all ate while they watched the television and on was a message channel where a pastor was preaching about giving making reference to the church in Macedonia and their giving attitude which sounded funny to the family and they all laughed before Mr. John began analyzing the way new generation Pentecostal churches were swindling people of their money in the name of church projects and biblical giving. He went on and on and on as was his usual method, not knowing when to stop or when his audience were bored of his lectures.
After a satisfying meal, Andy was so relaxed watching the Olympics swimming competition because Mr. John became bored of the pastor that he changed the channel preferring the Olympics to the message, he completely forgot his mission in the house which was solving the assignment of his niece. The competing girls on the television, who were always two, had to be in the pool free styling in a synchronized manner to a music of their choice while the judges graded them. ‘Uncle this is the assignments’ were the words that brought him back to reality as his heart jumped and he came back around. He looked to his left and saw Sheila holding a book in her hand smiling at his surprised face.
‘Uncle you can fear o’ she said as he went through the questions and other exercises included and realized that it would take a lot of time to finish them and he had a date with a lady friend he hadn’t seen in a while later on that same day, he thought of an excuse that could get him off the hook, after a while he said he could not finish the work in a day and besides he was not with his own laptop then asked if they could use that of her father but he refused and since her father refused letting them use his own which would have made the work go fast rather than using a desktop that was slow, he suggested he goes home with the questions and work on them at his own pace and speed when he is through she (Sheila) would get it along with the procedure so she can explain how she came about them in case she is asked back in school.
Everyone agreed to this suggestion so he won, Grace and her husband where preparing to go out for a meeting of Christians from their village in Anambra state (UBACA) to which Andy’s parents were also attending. On their way, Mr. John began his long sermons about how important it was for Andy to begin attending the meeting as it was the closest thing to being in the village without him knowing that Andy was not a fan of the village and all its activities. He endured all the boring conversations because he needed the lift to the place he and his date already agreed on meeting. They picked his parent on the way as previously planned then they headed to the venue. Andy got out of the car opposite the state polytechnic which was close to the place of meeting with his date.
Posted by ManLikeBlaze at 07:52